I’ve openly admitted that I’m a big music fan. That puts a certain type of writing into my social media feeds and browsing. A fantastic alt-country band, Lucero, tweeted a link that brought this week’s mentor texts to my attention.

Chris Prunckle draws, and writes, Wannabe, a comic strip which he has of late converted into a six panel strip that reviews an album. I fell in love right away. 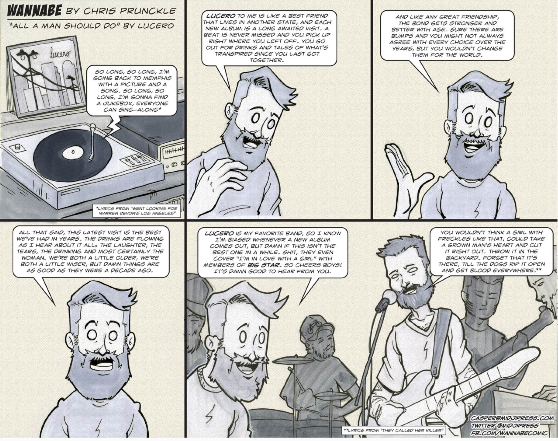 Because I love art too. In fact, that’s partly where my awkward Twitter handle comes from: I’m a habitual doodler. And, as I work with my students, I know that I’m not the only one. Many of my students, and likely yours, jump at the opportunities to present their work in creative and artistic ways.

Wannabe is such a great approach to the review. It is brief, personal and creative. Glide Magazine, one of Wannabe’s online homes featured an interview with Prunckle as they began hosting the Wannabe strip in November of 2015. It outlines the genesis of the strip, and its evolution into “a six panel music blog.” Of particular note is when he discusses the format:

“I have found a template that works so I’ve stuck with it. Panel 1 is my record player and whichever album I’m reviewing with some lyrics. Panels 2-5 are me talking about the album and why I like it. Panel 6 is a shot of the band or lead singer singing one of their songs.”

The fact that it’s so visual, I think, highlights what the writer needs to do. Six panels –– two featuring lyrics, and four featuring the reviewer’s thoughts. The overt insertion of self into the review is key to note as well. I think this could serve to help our writers focus their energies upon their thoughts and opinions as reviewers. Look at this one for what is likely my favorite album of 2015, Frank Turner’s “Positive Songs for Negative People”: 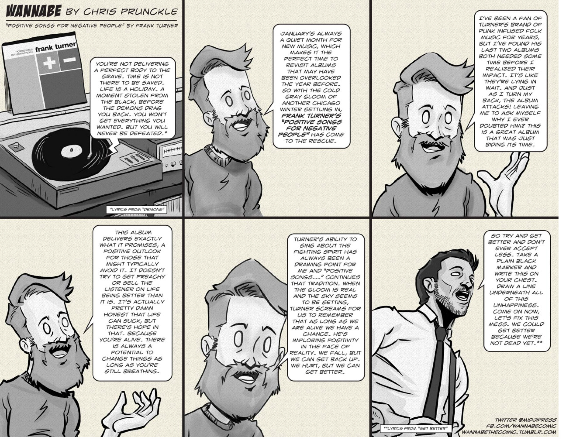 As a music fan, choosing the lyrics for panels one and six would be tough for me. That’s an important choice, because I need to highlight something that resonates with me. That kind of critical choice for our writers would be an important consideration to foster.

What I really like about this review is that panels two and three are less about the review, and focus on the reviewer, and his connection to the artist. Giving our writers a panel, or two, to justify their choice may seem counterproductive in writing a review, but they can lay out their bias plainly, which, in my humble opinion is one of the greatest failings of much criticism.

Panels four and five are where the criticism lies. This is where they talk about what the album does well. This review, in particular, deals with the fact that Frank intends this album to make a grand statement. Prunckle discusses whether or not he has hit that mark. Since Prunckle writes as a fan, he speaks from experience and knowledge of the artist.

I know that often our hesitancy to do this kind of thing comes in all the weird feelings that bubble up around artistic ability. Much like we do around writing, I try to build a culture that encourages experimentation with expression, and honours effort and style. But as I plan to take this into my classroom, I’m already plotting –– we could use photography and collage to put a review like this together, thereby dealing with the concerns about drawing ability.

I knew, as soon as Lucero retweeted Wannabe, that I was going to find a way to use it in my classroom. It hits too many of the things I like to have my students tap into to ignore. Having students express themselves in writing, and giving them an opportunity to present that writing in different ways, is important. We often, as English teachers, feel a need create showcase projects. This would be one that would be the best kind of showcase.

Are there other examples you can think of that marry writing and visuals? What other writing projects do you have that could be expressed in this format?