2020 has provided unique challenges to the effort to close the “Nature Gap”: minimal time spent enjoying outdoor play and increased time spent in front of screens has led to greater nature disconnection.  One way I’ve tried to address this gap in the virtual classroom is to use poetry writing as an entry point for learning about other animals.  Aimee Nezhukumatathil’s recently published book of essays World of Wonders offers a dazzling set of mentor texts for blending personal and natural history.  “My Cephalopod Year” introduced us to a spookily-named sea creature: in this essay, Nezhukumatathil details a period of loneliness during her teenage years through a description of the vampire squid.  Learning about the vampire squid while we studied Nezhukumatathil’s “craft moves” gave us inspiration for writing poems about this mysterious mollusk. Why an Essay Mentor Text for Poetry?

Nezhukumatathil’s essays model how encounters with nature spark insight and transformation: how speaking about your experience through some aspect of nature can help you translate your own emotions about it.  We found that work in one genre can mentor work in another.  Our poems could be seen as microcosms – encapsulating in miniature the same craft moves that made “My Cephalopod Year” pulse and glide.  Experimenting with features of the essay (midway shift into first-person voice, use of opposite pairs, and movement descriptions) in a more compressed form will help my students transfer and apply them in future contexts.

While watching the film My Octopus Teacher on Netflix recently, I was struck by documentarian Craig Foster’s respect for the wild octopus he visits in the underwater kelp forests off the southwest tip of Cape Town.  Over a series of dives, the octopus comes out of its den to hunt or explore while Foster watches.  After observing it hunt for food, “armor” herself with shells, and play with fish that zig zag overhead, Foster admits that it is “teaching me to be sensitized to the Other, especially wild creatures.”  Foster’s experience of gaining its trust suggests that we might come to know ourselves better through learning about creatures that took a markedly different evolutionary path – that we may come to know we “are a part of this place, not just a visitor.”  I’ve been inspired to create poetry lessons that honor these moments of kinship: moments when my students and I learn, from another animal’s example, to both appreciate the animal itself and to know how this encounter might expand our knowledge of ourselves.

Quick polling revealed that none of my students had heard of the vampire squid before.  Together on Zoom, we watched the Monterey Bay Aquarium Research Institute’s video footage of a vampire squid and learned more about this wondrous sea creature, rarely seen by human beings.  As we watched it glide silently through the water, a student typed, “It’s so pretty” in the Zoom chat.  A few of her classmates echoed the sentiment as we observed its slow, floating progress across our screens.

These lessons build on an ongoing conversation considering the personal connotations of “being alone”: 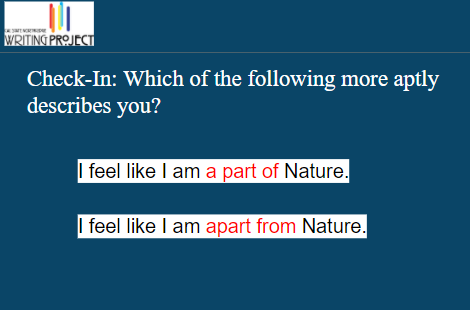 Nezhukumatathil structures the first half of the essay around an extended description of the vampire squid before shifting into a first-person account of herself.  This craft move was a great model for my high school seniors (who are currently thinking of creative ways to introduce themselves through a college application essay).  An initial, indirect approach to self-presentation can offer the audience a more memorable reading experience.  My students and I loved reading playful descriptions of how the vampire squid uses its own body and survival instincts to confuse its hunters.  It seemingly has perfected self-reliance – it is its own weapon against other creatures.   We laughed when we thought about how it makes itself look scary to others as it moves into the “pineapple posture.”

At this point, Nezhukumatathil shifts into a first-person account of herself.  The shift initially struck my students as jarring until we realized she had found a model of social survival in the vampire squid’s solitude. As she describes acclimating to being an unknown student at a new high school, images of disappearing into the school’s dark, hidden nooks are neatly tied to images of the ocean’s midnight zone – “a place where water doesn’t register light or silver filament.”

“I wished I was a vampire squid the most when …”

“That was my cephalopod year, the closest I ever came to …”

“[When] I emerged from my cephalopod year, exited my midnight zone…”

“If not for that shadow year, how would I know…?”

We used the beginning of these essay sentences as journal starters during Notebook Time, which had a huge pay-off – the habitat imagery of the vampire squid helped my students access their feelings about periods of isolation in their lives.

We quickly realized that Nezhukumatathil is a genius at creating a sense of the unexpected.  One way she does this is by describing an experience through opposite pairs (such as “prey” and “predator”) or erasing the distance between two items that were initially juxtaposed.  My students and I made a list of opposite pairs appearing in the essay:

I asked my students to begin crafting a poem that made an unlikely comparison between the vampire squid and something else.  Ameyalli’s poem, “Safety Zone,” powerfully invokes the dark midnight zone with contrasting ocean floor/ocean surface imagery.  The speaker identifies with the vampire squid as they attempt “social distancing” measures during the current pandemic: 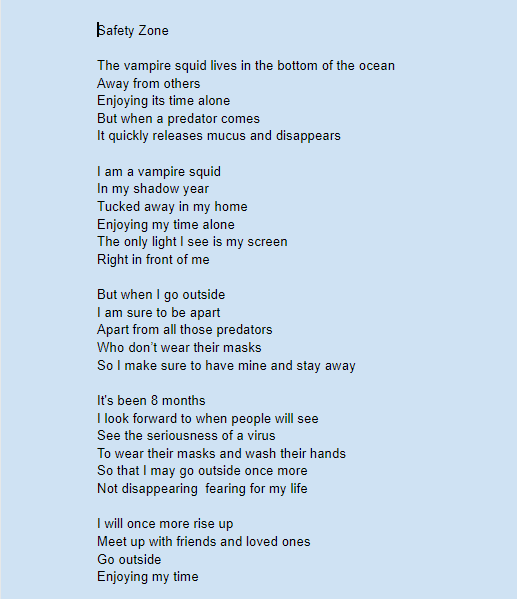 This poem captured that sense of the unexpected I associate with Nezhukumatathil’s shift into first-person voice.  It conveys the hope for safe emergence from the “midnight zone,” a wistfulness underscored by the repetition of both “disappearance” and “enjoyment.”  What Ameyalli’s poem taught me is that she and many of my students still savor alone time, even though the poem’s speaker acknowledges that isolation is the safer alternative to “surfacing” and exposing oneself to health risks.

One of the ways Nezhukumatathil’s writing communicates playfulness is through phrasing that memorably describes the vampire squid’s movement.  We made a list of notable phrasing that described its movement (as well as her movement) from one place to another:

To help my students develop the vampire squid comparison in their poem, I asked them to consider these questions:

Many of my students embedded Nezhukumatathil’s movement descriptors in their own poems, creating a wonderful “talking back to the source” effect.  My student Nathan’s poem strikes an admiring tone, as the speaker ultimately juxtaposes his own enjoyment of both alone time and company with the vampire squid’s unabashed preference for solitude. 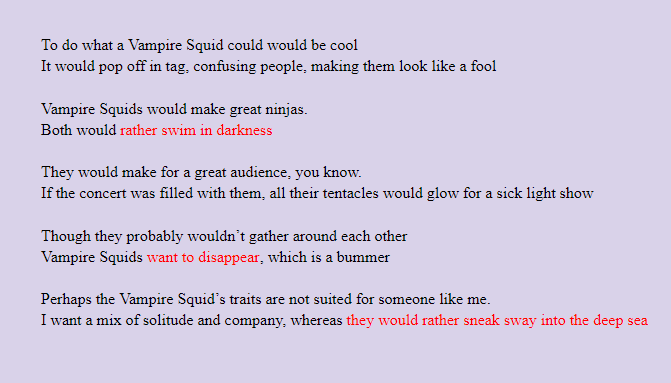 Each student poem I read was a “world of wonder.”  Just as Nezhukumatathil looks back on her “cephalopod year” with a feeling of gratitude, I will look back on encountering her essay in 2020 as a gift.  We’ll continue to address the “Nature Gap” in our classroom as we stage more animal encounters.