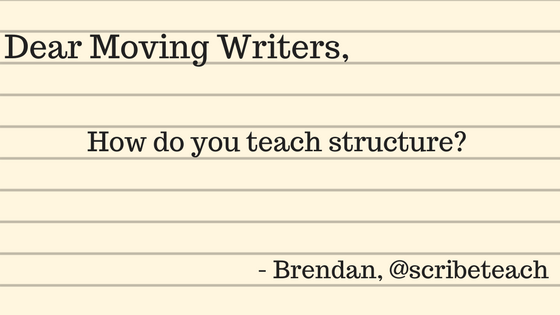 I can start with a somewhat facetious answer, in that I find a mentor text that the students can emulate. I channel the spirit of Austin Kleon, and tell my writers to be on the lookout for what they can steal for their own writing.

I use this approach most frequently with poetry, giving students a piece that highlights a specific form, or style, and having them write a version of it about a different topic. In my Grade 10 class, I try to make this a weekly occurrence as we work on our OUPAs.

Sometimes, I use the structures that exist in literature as aguide. The narrative arc diagram is useful for story writers as they plan. Once we know it, we can subvert it for effect as well. Often, in studying a genre we look at the tropes of that genre, as they can influence the structure of pieces written within that genre. Something like the Hero’s Journey gives us a ready made structure for adventure stories and I’ve used it to guide students as they write epic poems.

The most frequent request for structure lessons, from my writers anyway, is based around the essay. By the time I get them in their first year in our building, my Grade 9s have been given the list of Correct Ways To Write An Essay tips that seem rigid, and adhere to one particular kind of essay. They’re a bit intimidated that they’re going to be facing at least three and a half more years of that joyless exercise.

So, this year, with my Grade 9 and 10 students, I made a concerted effort to teach essay writing in a way that I hoped would allow them to write, exploring the idea that writing should be structured, but that there can be freedom within that structure.

I began by having them do their background work, to find the material that would be in their essays. This was a deliberate choice on my part, separating the act of research and the act of writing. It’s much too easy to overlap those today, and the writing is generally what suffers. Based upon what we were studying in class, they were given a series of things that they needed to find, or take notes on. My 9s were to research a storyteller of their choice, and my 10s were tasked with watching a children’s film they chose to discuss how that film can be used to teach lessons in adversity. I gave them note cards to collect their material. In their bags of note cards, I placed a reminder of what should be collected on each card. 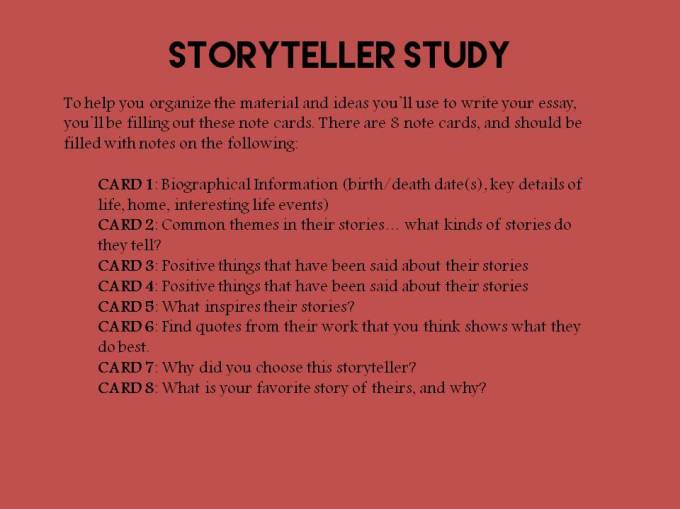 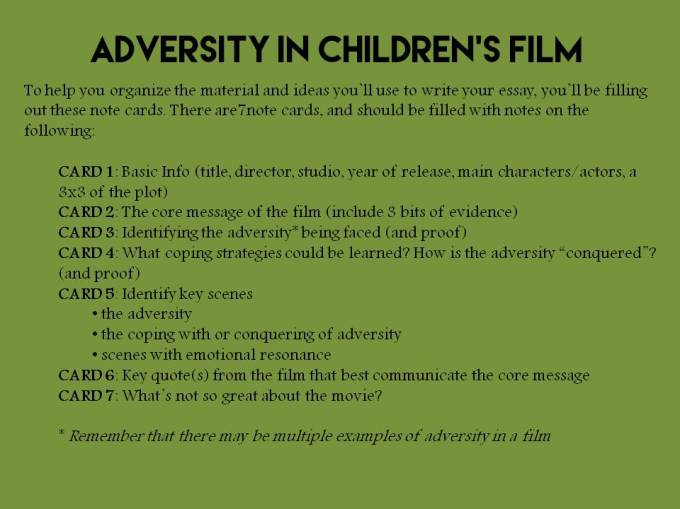 The note card thing is an old school approach on my part. I often joke with my students about being a pre-Internet student. Note cards were how I researched and organized ideas. I love the idea that the order of things can be changed by simply moving a card. Though I don’t make a big deal of this as they’re researching, the physical separation of the various elements that will make up their essay is important for me to create for them. Too often, when we teach a form, we give them the structure in a manner that almost creates a checklist for them, like the beleagured 5 paragraph essay. I appreciate that many students need this kind of overt structure, but “checklist writing” is often pretty clunky reading and doesn’t serve a student as well as it could. Throughout this essay process, I subtly, and overtly, try to work against essay structure becoming a checklist.

That being said, there are always students who need that rigid, detailed structure. Their reminder cards will probably be the order their essay arrives in, even though the rest of the process is intentionally created to subvert this.

Once they have a collection of completed cards, we begin writing. We begin with the introduction. They have cards that outline what they’re going to include, so they can introduce it. I pull out appropriate mentor texts for their assignment and we look at them, seeing what they do. We discuss the things that should/could be in an introduction, and we write one. To stress that we are firmly in first draft territory, we write however we’re comfortable, in our notebooks or on a computer.

Before we launch into writing from the material on our cards, I have them save that intro, and go to a fresh page, or a fresh document. This is intentional. I want them to avoid a first draft that is a single document. In my experience, that typed first draft is really hard for students to change. Even with the ease of cutting and pasting, they’re oddly reticent to make changes to the order things are written in. Since I want them to see that a key part of essay structure is in the choices made with how information is organized, I don’t want them to have that “done” looking first draft. The material on each card becomes a separate document.

To subvert checklist writing a bit further, I don’t necessarily follow the order that the cards are listed on their reminder cards either. Each card is alotted around a period’s worth of time. We do a few minilessons on structuring each of our arguments using organizational tools I’ve had success with. In essence, they write a series of minipapers on the subtopics within their essay. Focusing on one at a time helps them structure their subtopics well, without losing sight of the details as they focus on the greater essay they’re writing. It is, I’m aware, kind of convoluted, but has proven effective.

Obviously, once the cards have all been dealt with, we look at the conculsion of the essay, much like we did with the introduction. The process actually almost eliminated the contrived conclusion made up of the restating of the thesis and key arguments. Again, a look at mentor texts is helpful.

At this point, they have a first draft of sorts. It is in pieces. It is now that we can look at making it adhere to a more typical essay structure. I suggest that they revisit their introductions first, as in the writing of the body pieces, they may have moved away from their first try at it.

In creating their next draft, I want them to think about things, so I add the step of physically moving the pieces about – old school cut and paste. We print, or photocopy, each of the sections we’ve written, and spread them out, physically moving them around until we get a draft that works. We tape it together, or photograph it, and this is our second draft. This is used as a guide to finally put these pieces into a single document, which is edited and revised to “flow” as a cohesive essay. We also revisit our introductions and conclusions to see that they work, and we have a completed essay.

It is, by design, a drawn out process. I want them to see that the essay is a structure that is somewhat flexible, and that it can work in different ways, and is not necessarily a set structure. Yes, there arecertain conventions that exist, but this process is intended to give us a comfort level with the basic foundations of essay structure, and an awareness that good writers can move around these foundations. I feel as if these students have a stronger base to start with as we move into the higher grades.

In many ways, this is an expansion of my FrankenEssay of the past, focusing on generating some written material before creating the actual essay, and looking at structure as an act of construction, of placing the material in such a way to be an example of sound writing, structurally and aesthetically. I’m thinking about other ways to play with this idea, and wondering if I can adapt it to work for aesthetic pieces, as well as pragmatic ones.

Brendan, I feel like I threw a lot of answer at you… some short ones, and one awfully long-winded one. I’ve only recently been playing with structure quite so intentionally, but I hope my suggestions are helpful for you and your writers.

Good luck in this wonderful thing we get to do!