We spend a lot of time on this blog talking about all of wonderful things mentor texts can do for writers of all ages and abilities. If you haven’t noticed, we’re mentor text obsessed.

But,  in the interest of full disclosure, here is undoubtedly the worst aspect of using mentor texts in my classroom: it can take a lot of time.

In my early days of conscientious writing instruction, I would often look for mentor texts for my students by staring at my bookshelves, randomly choosing books that I remember liking, and flipping through them until I found a passage that might work. Spoiler alert: it didn’t. More often than not, what I got was a passable text that sort of did the job. My approach was lame. The texts were lame. My lessons lacked spark. At best, students didn’t care about mentor texts. At worst, they hated them.

That was years ago. The blogosphere boom and rampant presence of good writing on the internet has made mentor texts far more available than ever before. And still, until early 2014, my process for finding mentor texts had been largely unchanged. Now, instead of standing in front of a bookshelf, I would sit in front of my computer screen, pull up a website I liked, and randomly search, finally landing on a text that was okay-enough to work.

Two innovations have completely changed the way I find mentor texts. What used to be drudgery is now a hunt that is fun — something I actually enjoy and look forward to.

he first big change was our Mentor Text Dropbox. Finding a systematic way to store and retrieve potential mentor texts has been a game changer for me. Now, whenever I come across a possible mentor text — whether I have a use in mind or not — I can file it and know that it will be there later when I need it. The collaboration possible through the Mentor Text Dropbox has also changed the way I think about finding mentor texts. I am not simply searching my own resources but also the resources of colleagues. Every time I open the Dropbox, I do so with anticipation. Who knows what new treasures might have been filed since the last time I visited?

As in all things in education, sharing our burdens — dividing the work — makes our jobs easier and so much richer. 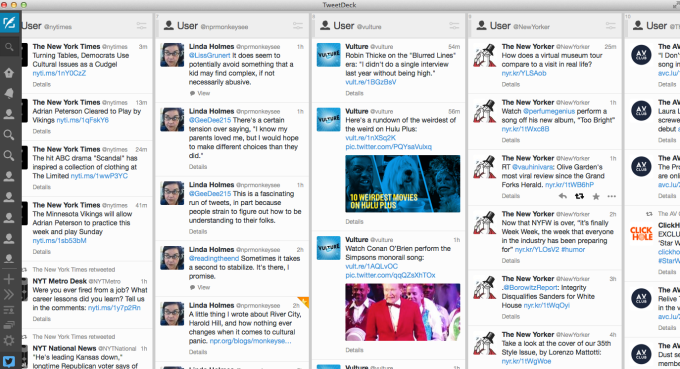 The second big change that has improved the way I find mentor texts was my acquaintance with TweetDeck. TweetDeck is a social media dashboard, like HootSuite and others, that allows you to manage and curate the way you view hashtags and other Twitter users. I first began using it last winter when I started participating in educational Twitter chats.

What I have found even more useful, though, is that it allows me to dedicate a column of its space to each of my go-to sources for mentor texts! I almost never look at my entire Twitter feed now. Rather, I open TweetDeck and see The New York Times, The New Yorker, A.V. Club, Vulture, Linda Holmes (a favorite writer from NPR), and the Paris Review neatly lined up and presenting me with their offerings. This has saved me an enormous amount of time reading through my whole feed ; at a glance, I can see if one of my favorite sources has published something new that holds possibilities for my students.

What systems — technological or otherwise — do you use to manage and find mentor texts?  Leave us a comment with your best tips or Tweet at us @RebekahOdell1 and @AllisonMarchett.  Searching for mentor text collaboration? Feel free to use our Mentor Text Dropbox and share the texts that have worked for you!