Twitter never ceases to amaze me for its ability to come through with exactly what I need at the right moment.  This week my students are studying Jonathan Swift’s “A Modest Proposal” and my colleagues and I wanted to pair it with some modern satire. Though Swift’s text certainly has some shock value (eating babies?! Gross!), it takes awhile to get there and we knew our students needed an on-ramp into that challenging piece of satire.

We wanted something the students would latch onto, but we were struggling to find just the right piece. Satire only works if the reader has the background knowledge to recognize the target. We sifted through a bunch of things and found something we liked well enough, but then Sunday morning, this popped into my feed: 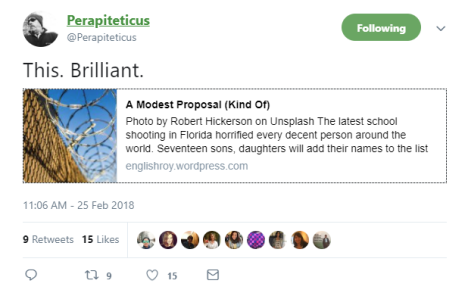 Really?? Seemed too good to be true, but it wasn’t.  It was perfect.  AP Literature teacher Roy Smith (@english_roy) wrote my lesson plan for me without even realizing it.

Here’s what I did with it.

I opened class by telling them I was going to read something aloud to them. I handed out copies and asked them to makes notes of “things they noticed” as I read.  I started reading and the mood was very serious. Kids assumed I was launching into a serious talk about guns.

When I hit “arm all teachers according to their aggressiveness”, the giggles started. By the time I got to “teachers willing to be trained in violence and mayhem”, everyone was in on the joke.

When I finished reading, we made a list on the board of things we noticed. Some highlights:

Without me ever uttering the word “satire”, they’d nailed its definition. We talked for a few minutes about the argument the piece makes and why the satire makes that argument so much more sharply than a straightforward piece might. They were ready for Swift.

Now, “A Modest Proposal” is usually a win with my students, but it takes them awhile to buy in.  Most years, a chunk of the class gives up before they get to the good stuff. This little gem–“a young healthy child well nursed is at a year old a most delicious, nourishing, and wholesome food, whether stewed, roasted, baked, or boiled”—is two whole pages in!!

Usually, many get so caught up in the dense opening that they don’t have the patience to wait for the punchline. Today, however, I told them to watch for a similar pattern. They knew it would start seriously and then there would be a shift. They knew that formal, serious language was going to mask a ridiculous proposal.

I watched them begin reading independently, brows furrowed as they made their way through the first page. Then the giggles, and gasps, and finally audible laughter as they discovered the horror of Swift’s proposal.   A shorter, highly relevant text provided an on ramp for my students to a more challenging, older text. I know I won’t always get so lucky in my Twitter feed, but today was an excellent reminder of how important it is to provide those on-ramps for students.

What have you found recently on Twitter that’s perfect for your students? How do you make on-ramps for challenging content? I’d love to hear what you’re using. Connect with me on Twitter @TeacherHattie or comment below!