Reading Octavia Butler’s Parable of the Sower in the year 2020 was a slightly eerie experience: so much of what Butler has presented in her fictional novel set in the 2020s is happening: uncontrolled fires, resource depletion, and rising sea levels.  Last year, the novel appeared on the New York Times bestseller list, twenty-three years after its initial publication.  Butler’s prescient storytelling is remarkable for how it shows the convergence of environmental and societal disintegration, as revealed through fifteen-year-old Lauren Olamina’s narration:

The cost of water has gone up again.  And I heard on the news today that more water peddlers are being killed.  Peddlers sell water to squatters and the street poor–and to people who’ve managed to hold on to their homes, but not to pay their utility bills.  Peddlers are being found with their throats cut and their money and their handtrucks stolen.  Dad says water now costs several times as much as gasoline.  But, except for arsonists and the rich, most people have given up buying gasoline.

Part of what distinguishes Lauren as a character is her willingness to acknowledge and anticipate problems that have begun to snowball – a mental disposition that counters the perspective of the adults in her community, a walled neighborhood in Robledo, California, where many embrace the ideas of President Donner, a politician who promises to return things to normal.  In marked contrast, Lauren strives to adjust to uncertainty, as she recognizes this push for a return to normalcy provides insidious cover for the brutal violence and the unequal distribution of resources that have been normalized.

As we discussed Butler’s novel, my students repeatedly described Lauren as someone who is able to “think outside the box.”  I encouraged them to unpack this cliché and dig deeper.  It’s not unusual for the protagonist of a dystopian novel to have a perspective that diverges from the norm – this divergent outlook frequently winnows a path for this character to push back against the controlling forces that perpetuate the bleak societal circumstances typical of a dystopian setting.  Reading my students’ journal entries taught me that Lauren’s willingness to find solutions modeled a specific type of leadership.  By unpacking the cliché of “thinking outside the box,” we noticed that a key feature of Lauren’s emerging leadership was an ability to see the flaws and the need for improvements in systems.

In my September post for Moving Writers, I described my students’ reactions to Paolo Bacigulapi’s depiction of water scarcity in his story, “The Tamarisk Hunter,” wherein a vast gulf exists between the coastal elite who enjoy the water pumped from the Colorado River and the desert locals denied access to it.  The disparity between “the haves” and “the have nots” prompted my students to imagine what measures needed to be put in place to plan for equitable water management.  Systems thinking is a tool that can assist us with finding solutions to the increasingly urgent environmental problems we face.  By thinking about the interrelationships of parts, we can strive to minimize the harmful impacts of our behavior.

Through applying the “iceberg model” map sometimes used by systems thinkers, we can see how Lauren is able to look beneath the surface level, and observe how events are parts of larger patterns.  Above the water line, we identify the event level that is purely reactive.  At the patterns of events level, we can see the behavior that our systems create over time.  At the systemic structure level, we see the political, economic, and social structures that create these patterns.  Finally, the mental model (paradigm) level reveals our beliefs about how the world works – a critical leverage point for envisioning new results: 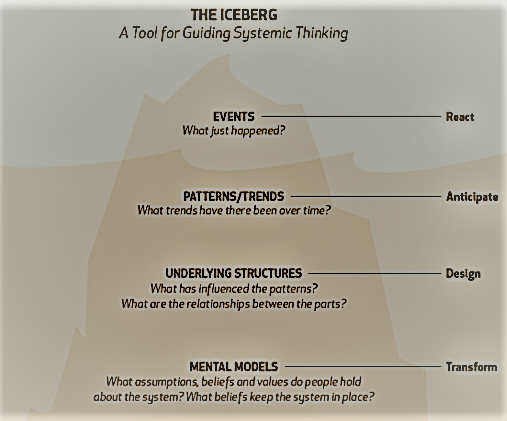 Reaction to the Event

Thieves, increasingly desperate and bold, crowbarred their way into the Robledo community by disabling burglar alarms.  In their haste to get away, they knocked over and killed an elderly woman, Mrs. Quintanilla.  Processing and reacting to this event is a huge turning point for the members of the walled community – Lauren’s reaction is a clear divergence from her friend’s hope of finding a better life in the coastal city of Olivar.

As the community struggles unsuccessfully to fortify itself in the hope of forestalling an even deadlier invasion, Lauren considers what kind of example the adults are modeling.  My student Kathryn’s journal writing sums up the contrast beautifully:  “All the adults in Lauren’s community choose to deny the reality of their neighborhood collapsing; the children are also inheriting this denial.”  The question of “What do we inherit from our elders?” can be a helpful entry point for considering differing reactions to the event and the intergenerational dynamics that inform Lauren’s growth as a character.

As the slide deck image below demonstrates, my students noted that Lauren foresaw the opportunistic behavior of the “land sharks”:

As the number of thefts within the neighborhood walls increases, community members seriously contemplate the prospect of applying to join a nearby privatized city: Olivar.  This juncture of the novel reveals how people still opt for the status quo, even in pursuit of a better life.  While working in literature circles in Zoom breakout rooms, my students diagnosed the problematic aspects of entering into a contractual agreement with KSF, the company that has taken over the small, coastal city: 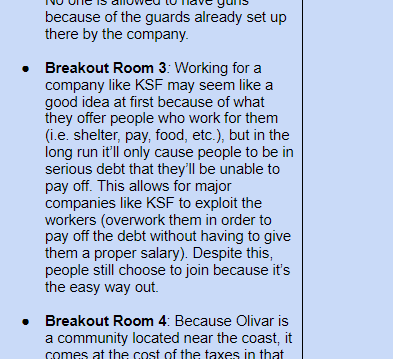 Though understanding how receiving the “protection” of KSF security would be a welcome contrast to the recurring threat of violent theft, labor laws are incredibly lax in President Donner’s America.  Lauren is able to discern the “old company-town trick”:

The ability to identify patterns as Lauren does is critical for mapping out alternatives to the default habits of thinking that offer little room for hope.  Instead of falling back on the same extractive models of labor, Lauren imagines the possibility of heading north and forging a new community.

Systems thinking raises questions about the relationship between the parts – the political, economic, and social structures – that underpin the patterns of behavior these systems create over time.  When Lauren’s friend, Joanne, asks her if privatized cities will become commonplace, Lauren is candid in responding: “When people like those in Olivar beg to sell themselves, our surviving cities are bound to wind up the economic colonies of whoever can afford to buy them.”  In their literature circles, my students thought about the crumbling infrastructure of Lauren’s society and considered the relationship between these problems and their root causes as seen in the novel:

My student Angel’s journal entry articulates the problem of addressing the symptom and not the root cause: Moving to Olivar is a short-term solution to the fear of home invasion.  The community members who have applied to join the city are not thinking things through.  Sometimes, city structures within Olivar crumble and fall into the ocean, since much of the city is already steeped in saltwater.  Angel does a great job of communicating the relationship between poor city planning and extreme coastline erosion.  What certain community members are willing to do to “get by” means putting down roots in a city that lacks a sustainable infrastructure.

The willingness to accept change and adapt is the cornerstone of Lauren’s Earthseed writings and the “Acorn” community she establishes.  Throughout the novel, she has observed the destructive beliefs that keep a system of unjust resource distribution in place:

In contrast to these beliefs which perpetuate mistrust, Lauren’s Earthseed community is focused on linking personal well-being, community well-being, and planetary well-being.  This level of the iceberg model can help students interrogate the stories the characters tell themselves and the model of leadership offered through Lauren’s restoration of community.

An Exercise for Iceberg Model Mapping

For developing systems thinking practice with student writers, discuss this mini-case example from the novel:

Olivar has a solar powered desalination plant that provides its people with a dependable supply of water.  Desalination is an energy-intensive process of removing salt from seawater.  Use the iceberg model levels to explore the environmental impact of this process.

How could you use systems thinking in your classroom? What text pairing do you suggest for helping students address climate adaptation?  Share your reflections in the comments below or find me on Twitter @dispatches_b222.