One of the biggest challenges in teaching rhetorical analysis is teaching kids to move beyond identification to actual analysis.  I have found over the years that when I teach kids to look for certain things, they find them!! If we talk about repetition, they can track it down. If we talk about parallel structure, boom. However, I’ve also found that many struggle to move beyond that identification.

And then they move on.

I would press them when we would discuss and analyze in class, and they could usually get to something analytical, but when they would move to writing, they’d still stop at identification.  I found myself scribbling (over and over) in the margins of essays “why is this important?” and “what does this show you?”

During a class discussion of a text a few weeks ago, I was digging for a more analytical answer and I said, “Yes, but why this word and not another one?” It was one of those teaching lightbulb moments when I realized it was a prompt my students could be asking themselves: Why this and not that?

It quickly became my go-to question when discussing in class.  In AP Lang, I am always trying to get my students to focus on the writer’s purpose. What’s he trying to get me to do/think/believe/understand with this text? I need them to think like the writer–to read like a writer–and see every word on the page as a deliberate choice.  Asking students to zero in on the why of one choice gives them a concrete entry point into thinking this way.

A few weeks ago, George Clooney penned a poem reflecting on the NFL protests and The Daily Beast published it.  We used the Why This/Not That thinking routine to become George for a little while and think about his choices. 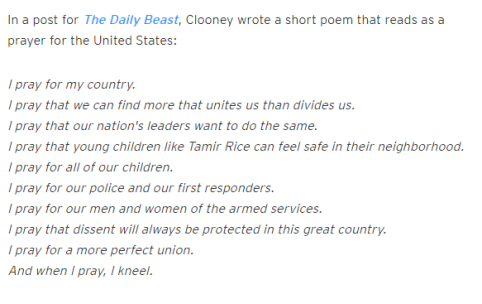 Why a Poem and Not an Editorial?

Clearly, we had to start with the text type. “He wrote a poem?” they asked. This was a great place to begin our work because we talked about the different messages his choice  might send to his audience. What’s the impact of a poem vs an editorial? Quickly, the kids started suggesting that a poem might be less “in your face” than an editorial. One brave soul countered that a poem might be counterproductive and could backfire. Clooney might be seen as “weird” or “out of touch” by writing a poem. We’ve been able to return to this idea as we’ve continued our work with other pieces. Instead of just identifying what type of text the piece is, they’re immediately comparing it to other choices the writer didn’t make and pushing themselves to consider why. Why write an open letter instead of an editorial? Why make a speech to a particular group?

Why George Clooney and Not The Pope?

Next we turned our focus to the speaker himself. Students decided immediately that the poem felt religious (he is repeating “I pray” so I guess they have a point). I asked about the impact of George Clooney as the speaker versus someone else. A kid yelled out “Like the Pope!”  Interesting alternative. Suddenly the kids were considering the interplay between Clooney and his audience. How is a prayer received differently from Clooney than it would be from a more traditionally “religious” person? How might it be received from a more controversial celebrity? Again, by pushing themselves to consider what’s not happening in the piece, they are able to see what is happening and why. This has moved them to examine the writer in all of the texts we’re reading. Why is this writer uniquely situated to make this argument? And, as they move into their own writing, who am I as a writer and how does that impact the argument I’m making? Suddenly the world of examining our own biases, our own contexts, is wide open. 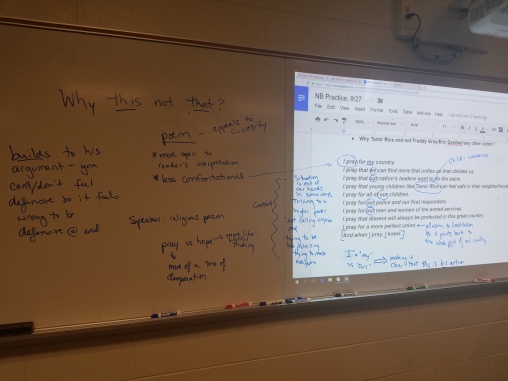 Finally, one of the noticings that caused the most discussion was when we started zeroing in on specific word choice. I asked why he chose “pray” to begin each line instead of something else.  The students quickly offered up “hope” as another potential choice and it sent them off on a lively discussion of the connotation of pray and how that word might impact the audience differently than a less charged one like hope.  They decided it made him seem more earnest, and they were more swayed by his message because of the vulnerability of the word “pray” vs the more vague “hope.”  Now, as we conference about their own writing, the next natural question is, “Why did you choose this word instead of another one?”

This short exercise was about two weeks ago, but I’m seeing it pay off in all kinds of ways because it’s helping my students read like writers. When they approach the text from a Why This/Not That mindset, they are putting themselves in the writer’s head and thinking about all the deliberate choices that went into its creation. Hopefully, as we move into their first “big” argumentative writing piece, they’ll translate this skill and our conversations about their writerly choices will continue. I’ll keep you posted.