We recently received this email from Angela in South Dakota:

I am writing about a podcast interview that you did with Talks with Teachers. You had mentioned you did a unit on using text evidence, and it hit me at my heart as my students struggle with providing relevant evidence in their writing. I searched your blog tags and did not find any resources. Would you be able to share some advice or do a blog post on ways to help students who struggle with this?

So far I have had them do some self-review and peer review on their own writing. They are just starting to see that they aren’t being effective in their use after the fact. I wish they would be more productive during writing to self-check and self-review their work. I know some of that is age and disability getting in the way.

One of my big goals for my SpEd students is to be able to have an opinion but also be able to give reasons so text evidence is important!

I’m going to make a bold statement: evidence is the biggest weakness in student writing. Copious, persuasive evidence and unique, compelling voice are the two elements of writing that have most distinctly separated my student writers from the pros.

Yes, text evidence. But also so much more.

Evidence is anything a writer uses to support the purpose of her piece of writing.

You’re right. It is. Intentionally so. Students are traditionally taught that evidence can be 1) quotes from a text and/or 2) research. Consequently, we get to teach finding-and-using evidence twice: when we teach literary analysis and when we teach research writing. And students practice this skill only a few times per school year, depending on how many literary analysis or research papers they write.

No writer gets better at using a technique without constant practice.

But, when we broaden the definition of evidence, when we teach that evidence is critical in every genre of writing, students suddenly have an opportunity to practice thoroughly incorporating evidence into every single thing they write.

When you think about it, evidence is really at the heart of so many of the problems we see in student writing:

How do we teach this broad understanding of evidence?

But a few years ago, when I first noticed this big gap in all student writing, I taught a technique study solely on evidence.In March of that year, I realized that in every writing genre of the year, students had lacked in the ability to support the purpose of their writing. In this study, students could write in any genre they wanted, and using oodles of compelling evidence was the only requirement.Here’s how the unit went:

I gathered mentor texts in a variety of genres.

We recommend 3-5 mentor texts as the ideal number for a mentor text cluster — it’s enough to give your students a variety of authors’ choices to look at but not so many that they are completely overwhelmed. For this study, I chose one mentor text from each genre we had studied so far that year — poetry, memoir, op-ed, and analysis.

Because I wanted this to function as a mini-unit and take a week or two rather than 4-5 weeks, I chose mentor texts they had already studied. This gave us a shorthand to move forward quickly. Still, this would have worked with brand new texts if I had been willing to give it a little more time to foster readerly understanding of the texts. The important thing is that the mentor text represented many genres in which students might want to write.

I gave students the definition that I shared with you above — that evidence is anything the writer uses to support his or her purpose.

We defined the writer’s purpose in each mentor text.

This is something we talk about with everything we read as readers. We ask, “What is the writer trying to do, to make us see, to help us understand?”  Depending on the genre, the writers might be describing a place, recalling an important lesson they have learned, arguing that their opinion is valid and important, or making a claim about their view of a text.

Students searched for all the different kinds of evidence used in each piece.

Naturally, students began their search by looking for things inside quotation marks (text evidence and research) and number (facts, statistics, etc.). But that couldn’t last but so long; they had to branch out to figure out how the writer’s purpose was supported.

With a little prompting here and there, students worked in small groups to compile lists of evidence. Here’s the list we compiled as a class: 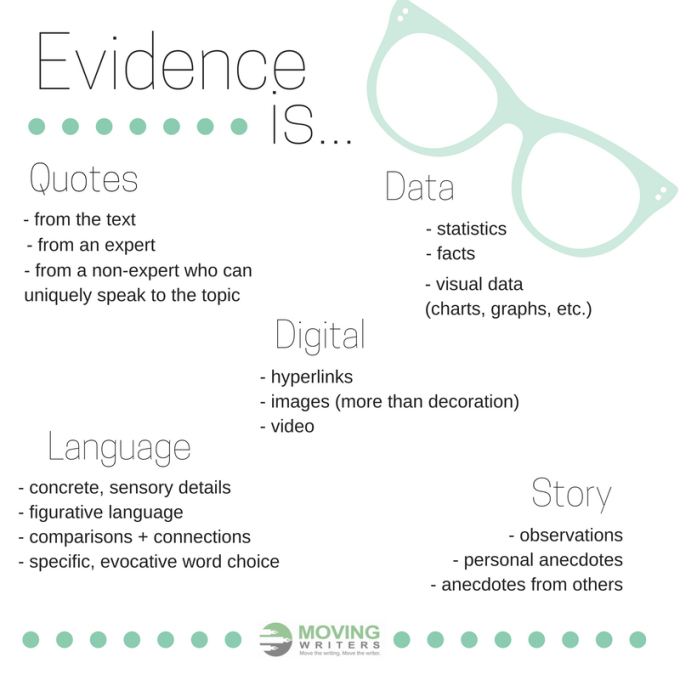 One of the things I liked best about this evidence study is that it doubled as a free choice piece of writing — students were allowed to write anything they wanted in any genre they wanted as long as they could pump it full of evidence. Most students returned to genres we had studied before, but others tried something new — a couple chose fiction, one tried his hand at a graphic short story.

As I conferred with students, as they worked with one another, as I assessed their best drafts, the only thing we discussed was having copious, varied, and persuasive evidence.

This technique study didn’t once-and-for-all cure my students’ evidence problem — does anything? But broadening the definition of evidence allowed student writers to access a grander palette of writing techniques. Giving them one goal in their individual writing projects allowed them to focus and find success with a major trait of strong writing that they have previously viewed as a minor detail.

How do you teach your students to use evidence in bigger, broader, more effective ways? Leave us a comment below, find us on Facebook, or send me a Tweet @RebekahOdell1.