Adrian Nester is an AP English teacher and journalism adviser at Tunstall High School in Dry Fork, Virginia. After 16 years of teaching, she is thankful to have met her AP Lit Help teaching community when entering into her mid-career crisis years.  She is the mother of two, wife of one, and teacher of many. You might remember her from a guest post at the end of last year.  You can find more of her writing on her website — adriantnester.com. 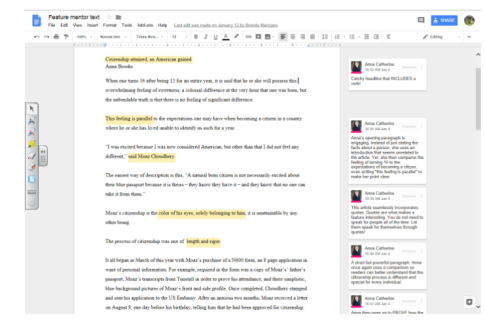 At first I was skeptical. It sounded interesting, but would it really work? If I provided a model for the students, wouldn’t they just basically copy what was in front of them? Wouldn’t even the most well-intentioned students feel like they had to rely too heavily on the mentor text?

My skepticism quickly dissipated once I gave the concept a real chance. I realized that I had been using mentor texts in class, but just did not give it that particular name when modeling top performing AP Literature essays.  When we look at an example of a high scoring paper, we notice the moves, structure, and phrasing of a well-done piece.

After impressive student engagement in my first mentor text inspired lesson on Truman Capote’s “A Christmas Memory”, I knew that I had to integrate mentor texts more in my classroom.  Since reading Writing with Mentors, I have had several particular areas of success with the following four assignments.

This assignment started with the reading of several Spoon River Anthology poems and noticing the various connections and distinct voices in the works. The next part of the assignment was to have students visit a local graveyard or cemetery and record some of the epitaphs and tombstone information that they discovered.  Except for the few students who were really weirded out by this assignment, most of the students drew inspiration from various epitaphs and Master’s original work. Students wrote their own set of four poems with some type of connection inspired by at least one headstone epitaph.

Using Master’s original poems as a model for how to contribute to their own characters’ voices, students were able to write original, engaging poems with plot twists galore. See a student sample of a set of poems here.  Using mentor texts with creative writing gives students who are nervous just enough guidance and students who are comfortable just enough freedom.

Last year following the AP Literature test, I decided to have my students write commencement speeches and deliver them to their classmates.  I was particularly nervous about incorporating mentor texts for commencement speeches as I was afraid that I would then be listening to the same slightly different version of the same speech. Would students who were not naturally funny try (and fail) to imitate Stephen Colbert’s speech at Northwestern? Would every student try (and fail) to create a similar “Make Your Bed” analogy as Admiral McRaven so expertly did at the University of Texas?

The commencement speeches were a huge success and each one was so very different. The mentor text speeches that we read, watched, or listened to only served to help students amplify their own voices as they found so many different ways to say goodbye, to say thank you, and tell us what they learned. We laughed and cried a lot that week.

As I prepared to teach contemporary poet Clint Smith’s collection Counting Descent, the idea of using his work as mentor text kept emerging.  Smith’s voice is so clear and so current; I felt sure that students would be inspired by him to write their own work. Students were asked to model poems after Smith’s odes, elegies, and his “What the _____ said to the black boy” series of poems within his collection.

Students who never knew that they could write creatively were able to express themselves with such a strong model. See an excellent sample here with my student, Zoey White’s poem on grief with “Ode to the Empty Vase”.

With a mixed level journalism class, I have seniors with four years of writing experience in the same class with first-year journalism students. With the help of Google Docs and mentor texts we have started to create a collection of writing for newcomers to reference. First, I had my editor create a mentor text for a feature article which she annotated with comments telling what makes this feature a good mentor text with notes on the headline, use of quotations, details, and transitions. Then each advanced student was assigned several mentor texts to select and virtually annotate.

I have a growing body of articles to which I can refer inexperienced journalists to use as a guide. Even good writers can sometimes have a hard time adjusting to the “newspaper style” of writing and the mentor text folder provides them with just the right amount of guidance and support. We can continue to add to the folder in the coming years.

Students have more confidence and guidance when they have a mentor text to reference. I would even go as far to say that they feel more at home and taking a risk stylistically in their writing when the expectations are so clearly modeled for them through a mentor text. Once I embraced the mentor text philosophy, the application in my classroom made this formerly skeptical teacher a believer.