Last week I participated in a Twitter chat hosted by @TalksWTeachers and this blog’s creators: @AllisonMarchett and @RebekahODell1. It was a fast-paced flurry of awesome ideas and thought-provoking questions, but one question in particular kept me thinking the next day.  Allison posed the following question:

What do you struggle to teach and how might mentor texts enable that?

I struggle with all kinds of things, but the one that popped into my head first was my struggle to wrestle kids away from formulaic writing. I thought about formulaic writing a lot this summer. In June I was a reader for the AP Language exam and read hundreds of formulaic essays. The brave essays that abandoned tired, overused formats were almost always more engaging to read. Later in the summer I read this lovely take-down of the 5 paragraph “monster” by Kathleen Duddan Rowlands in NCTE’s English Journal. So, when asked the question about struggles, my immediate response was this: 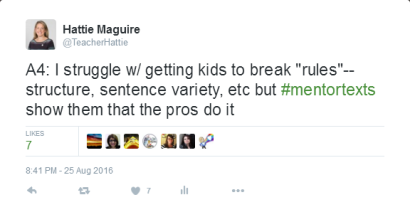 Okay. If #mentortexts show them that the pros do it, which ones will I use? Time to tackle this struggle.

My AP Language class started the year with personal narrative writing this week. It’s a great chance to introduce this concept of rule-breaking because we’re focusing on developing an authentic, genuine voice. Our speech is certainly not governed by the same rules as formal, academic writing, so when developing a sense of voice in their writing, narrative is a natural place to begin.

We started by examining  “The ‘F’ Word” by Firoozeh Dumas. It’s a hilarious and poignant reflection on embracing your own identity and developing a sense of self.  It’s perfect for rule breaking and my students noticed places where she strayed from conventions right away.

“America is a great country, but nobody with a mask and a cape has a z in his name. And have Americans ever realized the great scope of guttural sounds they’re missing?” (Dumas 62).

We talked about the purpose of the hard stop between ‘name’ and ‘and.’  Why not just cut the ‘and’ altogether, we wondered? We revised it a few different ways and tried reading it with different punctuation. Finally, the class came to the conclusion that it added to her conversational, genuine tone. One student said he could picture her standing with her hand on her hip and shaking her finger:  “And another thing…”

“I wanted to be a kid with a name that didn’t draw so much attention, a name that didn’t come with a built-in inquisition as to when and why I had moved to America and how it was that I spoke English without an accent and was I planning on going back and what did I think of America?” (Dumas 63).

My students zeroed in on this sentence right away. We read it out loud and talked about how beautifully it shows her frustration without ever saying the words “I was so frustrated!” Ah! There it is–the old “show don’t tell” writing teachers are always telling students. The run-on can be used purposefully!

“Can you really make up words?”

This was a tough one for me–and, honestly, unintended. Before studying “The F Word”, we actually read a hilarious Facebook post about a Roomba’s tragic encounter with some dog poop. The students had loved the writer’s invented words: Pooptastrophe, poohpocalypse, the poopening. Then, in ‘The F Word’, Dumas makes up some funny words of her own when she refers to her brother Farbod as “Farthead.”

I felt a little stuck because I really didn’t want my students focusing on the kind of humor I usually associate with my seven-year-old. But I had told them to look for broken rules…..luckily the lunch bell rang.

During lunch, I was scrambling to find a mentor text for a lesson next week and, no joke, stumbled on a made up word. I was reading an essay about school lunches in Anne Lamont’s Bird by Bird and she described misshapen carrots as “cuckoo-bunny” carrots. The next day, during independent reading time, I found another one in the book I was reading, Born to Run, where a man telling stories was describing as “calliope-ing”  from one tale to the next. In both cases, the words were perfectly descriptive and perfectly made up.  Rule broken. Have at it, guys. Add it to the anchor chart. 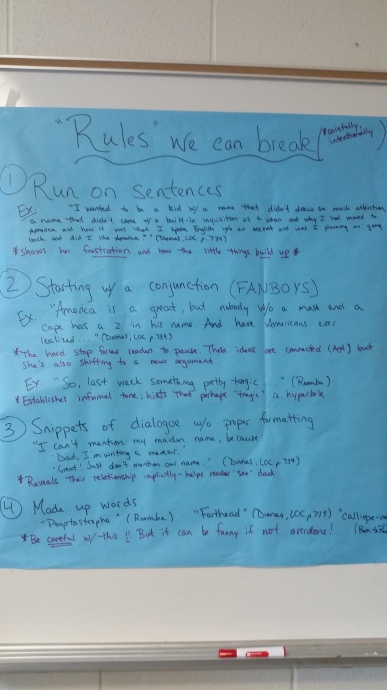 How did it work?

This weekend I’m sifting through drafts and I’m happy to report that my students are making some intentional decisions to break rules. One student is playing with Dumas’s strategy of run-on ending in a question:

The sixteenth notes in measure 72 had sounded as if a slinky had gone down a set of stairs; the notes slurred together and sounded like a hot mess. Not only that, but were my notes precise, and how did the dynamics sound, and why had that trill sounded so off?

On her Google Doc she labeled this as her attempt at a run-on.  I replied, “I like it, but I think you can do more. It looks like you’re trying to capture your stressed out feeling. I think you can layer in more little chunks and questions. Keep playing with it!”

I think that’s the key advice for my students:  keep playing with it.  They are so eager to please;  it’s the blessing and curse of AP students. They so desperately want their writing to be right, and they miss chances for it to be fun.

I think this is a strategy I’ll be able to repeat pretty simply all year.  Look at a mentor text, find something “rule breaking”, deconstruct it, and discuss why the rule-breaking version is so much better. If I continually reinforce for my students that professional writers take risks with their writing, hopefully they will be more willing to try the same risk-taking in their own writing. I want my students to play with language and structure–just like Dumas does in “The ‘F’ Word.”  Writing is supposed to be fun, and if we don’t show students how to break the rules, they’ll miss that.

What rules of writing would you like your students to experiment with breaking? What kinds of mentor texts do you use to demonstrate that rule-breaking? I’d love to see your examples! Connect with me on Twitter @TeacherHattie.