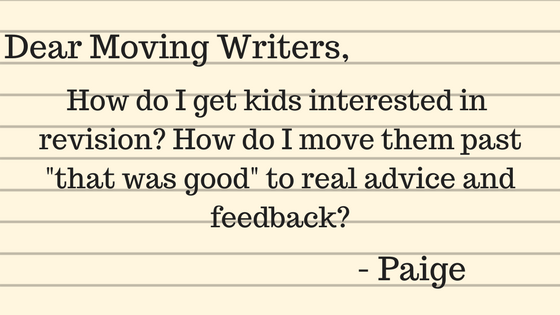 Hi Paige (and all our readers!),

I love this question…although that might be because I’ve asked it myself so many times!  I wish that meant that the forthcoming answer was some magic bullet I’ve discovered, but alas, I’m fairly certain that no such bullet exists.  But there are some magic spells (I don’t like bullet metaphors–so violent!) that I’ve found work at least some of the time.

My overarching advice would be to be willing to cast lots of spells with any given piece of writing–one student may respond amazingly to one approach while another proves impervious to the same strategy.  There’s probably a Voldemort in every class too–that one kid who just doesn’t respond very well to ANY of your magic.

To that, I say this:  Always think about your revision assignments with your MOST reluctant writer in mind.  Sometimes we see all of the problems in our weakest writer’s paper and immediately think to fix all of them at once.  I think it’s important to remember that when we write we open ourselves up to others.  For a writer without confidence, that creates a lot of vulnerability and anxiety.  If we fulfill their worst perceptions about themselves as writers with our feedback and revision tasks, then we certainly can’t say that those assignments are designed to help improve writing!

Fixing everything, in other words, fixes nothing.

Try making your revision assignments about the student’s desires for the paper.  If you can highlight a few positives in your feedback, you can use those to motivate your reluctant (read: discouraged; read also: uncertain, anxious, etc) writers to take some small risks and build a little confidence at the same time.  Some of your writers will need more time than others to warm to the very idea that they CAN make a piece of writing better.  Keep trying, and keep in mind that there’s a wide variety of approaches.

If there is anything close to an all-powerful spell to engage students in meaningful writing revision, I’d say that choice is the spell and workshop is the wand that casts it.  When my argumentative essay this year became an open-choice topic (instead of literature based), it was astonishing how much more invested my writers were.  And much of their revision work happened through formal and informal conversations during the workshopping process.

Conversations during the workshop process became the foundation of revision.  It was amazing how many of my oft-reluctant writers were suddenly seeking me out for extra advice, bouncing ideas off of one another as they wrote, and engaging in long, open-ended conversations that helped them to develop better pieces.

If you’re already giving students broad choice and providing ample workshop time, then my only additional advice would be to recognize that for a huge percent of their workshop time, your students may not be “writing” in a reductive sense of the word (no pens moving or keyboards tapping).  But if you walk around and listen (and engage and encourage), you’ll be surprised how much of what you thought was “down” time is actually where a lot of their best writing takes shape.

This is also an excellent time to help guide student revisions:  It’s funny how often a student will verbalize something and then express frustration about how to express it on paper.  They are often genuinely startled when you say, “You actually just said that in a really clever way–you should write that down!” or “Your sense of humor works really well when you talk about this topic–maybe get some of that into your intro!”  One reason I’m really fond of this sort of process-centric revision is the extent to which it gets reluctant writers more engaged in the revision process without actually having to utter that word aloud:)

The Power of (Your) Voice

Another reason I really liked your question is because it specifically addresses the problem with getting students to revisit a paper once feedback reaches them:  “That was good” always reads to them as “Time to move on.”  I’ve found their reaction to be similar whether the feedback comes from formal peer review or from my grading.  One solution I’ve found is to make your own feedback verbal, and more importantly, make it into a brief narrative about their writing.

You can do this with all sorts of apps.  Since my school uses Turnitin.com, I just use the audio feedback feature to provide the kids the gift of my upbeat, encouraging voice in three minute chunks after every paper!

Let’s say a student had a really strong, clever intro but then the rest of their paper fell into disorganization that was made worse by grammar issues galore.  In traditional feedback, that paper has margins stuffed with teacher remarks that probably feel overwhelming and turn that student off (especially if it’s a writer who already lacks confidence) to the idea of revision before you ever even assign it.

With verbal feedback, all of that ink is replaced with a guided tour of the paper for the student:  “I really loved what you did with your introduction, particularly line X.  And I love that you carried that phrasing into paragraph three, but look how the run-on sentence there sort of ruins the power it could’ve had–those sorts of errors are holding back a lot of your best lines in this piece.  I think the power of that phrase you use would’ve been even more effective if you found better evidence for that paragraph too…”  And so on.  The key is that when you turn your feedback into a friendly narrative, you also invite students to see their writing as full of potential–not just full of errors.

The Power of (Their) Voices

While I found that recording audio feedback made my students more willing to revise, they didn’t become more effective at revising until I started asking THEM to record a narrative of their revisions and send it back to me. Ideally, have them record their revision efforts using a medium that allows for video too.  I had my students highlight and label and color-code their revision efforts and then walk me through the reasons they made their revisions instead of the revisions themselves.  This made them think of themselves as writers with a purpose as opposed to students completing a task for the teacher.  You could use lots of applications for this, but I’ve found Flipgrid to be the most effective by far. You can see some samples of my students’ efforts at audio/video revision in this blog I wrote last school year.

If all of this feels too full-scale to implement at once, then my simplest advice would be to keep writing feedback and revision simple.  Let students choose their own areas of focus at least some of the time, and make sure that revision is always about why the writer believes in the changes she is making–if the assignment is about why you want the writing to change, then it isn’t really revision at all.  Finally, remember to try and see student writing through a student’s eyes–when we expect them to see it through an English teacher’s, we’ve already made revision impossible.