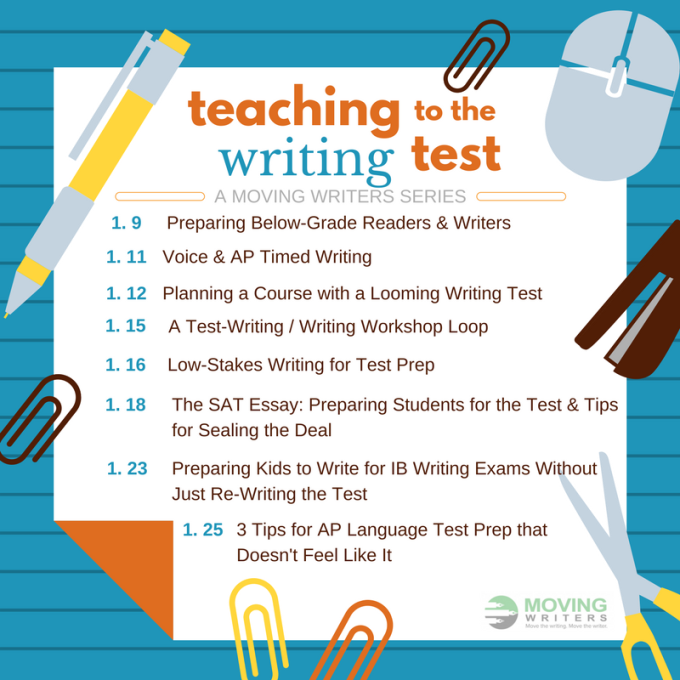 My first year teaching AP Language, I was overwhelmed by the grading. The class culminates in a three hour exam; for two of those hours, students are writing three different essays. The amount of prep your average student needs to confidently bang out three essays asking them to do three different things in two hours? A lot.

But, I was new to the class and determined to prepare them well, so I parked myself at my kitchen table every weekend and graded. Essay after essay after essay. By the end of the first semester, all 90 of my students had written at least six process essays (Two of each kind! Gotta show growth!)  Second semester we dove into practicing timed writing so we did two EACH WEEK. There were about 12 weeks in second semester before the test so that means about 24 essays per kid.  Quick math? I easily assessed about 2700 essays that year. That’s insanity.

And it was completely unnecessary.

I know it was unnecessary because I’ve never done it again (my husband threatened divorce!) and my students continue to score better than that first group every single year. Over the years as I’ve shifted to a Writer’s Workshop format, I’ve made more and more moves toward low stakes writing because I’ve realized it’s really the most effective form of test prep.

Instead of learning to be robots, we learn to be risk takers.

As soon as they know something “counts”, they switch into robot mode. What do I need to do to get an A? If I’m being completely truthful, robot mode can actually be pretty effective for prepping kids for a writing test. Robots can be trained to spit out essays that will score “proficient”, usually. Your essay always needs X, Y and Z. Never do A or B. Follow this formula.

When I remove the threat of the grade, students are much more willing to try things out. For example, in class Friday we studied two essays from an Essence magazine feature considering Martin Luther King Jr.’s question in his last book: Where Do We Go From Here: Chaos or Community?  Neither is structured like a traditional argument essay that my students have written in school, but each makes a compelling argument.

Today, students are writing an in class,timed essay where they consider the question themselves with the explicit goal of trying something new with their structure. If this essay was graded, they’d freak out. Since they know the only thing we’re going to do is talk about them and figure out what worked and what didn’t, they’re digging in.

Instead of learning to be efficient,  we learn to be intentional.

When I used to score everything my students wrote, I found they became incredibly efficient. That wasn’t bad; I knew on test day that they could go in there and churn out some essays. I didn’t know, though, if they were making deliberate choices when they wrote.

Tomorrow when we discuss the essays they wrote today, we’ll start with some very simple questions:

Students will annotate their own essays with answers to these questions, they will talk about those things in small groups, and they will give each other feedback as I circulate and chime in occasionally.

In the days to come, we’ll do a few more essays in a similar process. Before we do those essays, we’ll get these out and revisit the questions and annotations.

All of this reflection about their writing choices will go in their notebooks.

Instead of learning that our teacher is going to turn into an overwhelmed shell of her former self, chained to her kitchen table grading her weekends away, we learn to be thoughtful critics of our own writing.

After we’ve written a few, I’ll ask students to conference with me about their argumentative writing. They’ll choose one to talk about with me. They’ll lead the conference and tell me what they’re trying to do in the essay and where things are working (and not working).

Eventually, I’ll ask them to choose one for me to score to “count” for their grade. Maybe the one we conferenced about, maybe a different one.  Many will balk and say, “You tell me which one is best.” Or when they get the graded one back, they’ll say, “Can you read this other one as well?”

It is uncomfortable for many of them, but if I cave and reinforce the notion that I am the only one capable of judging quality writing in the room, I undermine their ability to see themselves as competent, confident writers. When they have to choose, suddenly they’re asking each other great questions:

This is not an easy shift.

I don’t want there to be any confusion–getting kids on board with low stakes writing is not easy and it doesn’t happen overnight.  When kids think that something doesn’t “count”, some struggle to see its value. It takes all of my teacher patience to keep reminding some of them why we are writing, encouraging them to engage, helping them reflect on their own growth, and celebrating their growth when it happens.

Some fight me all year long to just give them a grade on everything. Just last week one young lady ended a writing conference with, “So if this was graded, what would the grade be?” Though I wanted to scream, I just smiled and said, “Don’t worry about it. Focus on making the writing more powerful.”  She was frustrated, I was frustrated, and that’s okay.

A focus on low stakes writing is best for my students and it’s best for me. Both of those things must be key considerations when we think about how to best prepare our students for tests. Had I continued my 2700 essay insanity, I would have quickly burned out and abandoned teaching AP.  With low stakes writing at the center of my classroom, I can focus on developing my students as independent, confident writers and still have a life.