One of the very best parts of writing this blog is the opportunity to connect with inspiring educators across the country. This week, we are sharing a two-part guest post from Cincinnati teacher Beth Toerner (btoerner). We connected this year through a mutual professional friend and spent months corresponding about her 8th grade classroom and her desire to move them toward more authentic writing experiences and products. What you will read today and on Wednesday represents one of those experiences that changed the shape of her classroom and her students’ writing lives. Not only are Beth’s experiences and student work amazing, but so is her reflective spirit and willingness to change her plan mid-stream when she realized her students needed something different. Something more. We are SO excited to share this with you.  – Rebekah

Last year, I started using essential questions to help my students connect our whole class novels through a focus on universal human issues. This year, I attempted to transition these questions into literary essays about the topics using mentor texts as guidance. My plan did not unfold as I imagined, but the course it took produced more authentic and thoughtful writing than I have seen from my eighth graders all year. In the following posts, I will work through the steps that this process took in class and share what we learned along the way.

Whole class reads: Of Mice and Men, “Flowers for Algernon,” and Stargirl

Before reading, students write short, informal responses to these questions to get them thinking about the ideas. During third quarter, we read the texts above in the order listed, frequently circling back to our essential questions for discussion and reinforcement of the guiding ideas.

After we had read all three pieces, we did an activity to help students specifically connect their thinking about these questions to text-based evidence from the pieces that we had read together. This activity (Allison’s brainchild), called “Inside/Outside Brain,” required students to organize their “inside brain thoughts” by writing them inside a giant face and the matching them to their “outside brain” supporting evidence. I modeled on the board and they wrote in their writer’s notebooks. 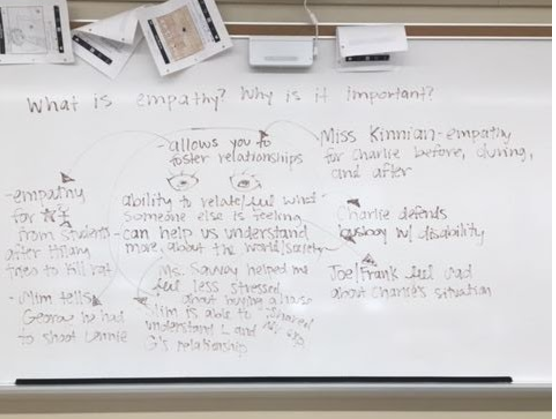 After completing this activity, my goal for students was to write a literary essay in which they responded to one of our three essential questions in a lengthier, more detailed response. I planned for them to use our common texts (Of Mice and Men, “Flowers for Algernon,” and Stargirl)  to support their thinking. It seemed like I had it all in order: I gave them questions to help them trace the development of ideas as they read, we brainstormed examples together, and I had three wonderful mentor texts to help them discover ideas for crafting and organizing masterpieces.

However, as my students brainstormed ideas, I started to feel uneasy. Although my students were doing a perfect job sharing examples to support our essential questions, like the idea that Stargirl’s shunning at Mica High School and its impact on her emotional state showed the importance of human connection, I also noticed that they were eagerly sharing examples from books we had read in seventh grade, as well as books they had read on their own. Would requiring them to write about the three texts that I had chosen squelch their creativity? Would limiting them to one of three teacher-generated questions limit their thinking?

I took some time to reflect. My students were doing something much more important than what I had planned for them: they were thinking beyond our classroom lessons and analyzing the impact that reading has had on them throughout their lives. And of course, each student had a unique experience with reading. Different books, different life experiences, different lessons gleaned. I needed to create an assignment that allowed them to express these thoughts.

So, we changed the plan. I told my students that their ideas had changed my idea, and we started with a new assignment: a literary essay that answered the question “What does reading teach us?” We were able to use the same mentor texts that I had originally planned, and in fact, they were a more natural fit for this piece than for what I had previously developed. We centered our study around three mentor texts:

“Their Inner Beasts: The Lord of the Flies Six Decades Later”

“How Judy Blume Changed My Life”

Each of these mentor texts has its own strengths in modeling the writing that I wanted my students to do. I was looking for writing that showed a deep understanding of literature but also shared a more personal element; I wanted students’ essays to have a conversational tone that zoomed in on a discussion of the subject (a book, author, or characters) through a very personal and reflective lens.

The first mentor text with which we worked was “Here’s What The Catcher In The Rye Can Teach You About Life”. This text functioned well to start this project; its length was accessible, the highly structured list format gave both an approachable model for organization, and it was a jumping off point for a brainstorming activity.

First, we read the article as a class and had a quick discussion of the general plot and themes in Catcher itself. Even though my students hadn’t read it, the fact that it focused on universal lessons made it accessible. Next, we made a list of what we noticed as writers. My students noticed all kinds of stuff:

I thought that this structure could be a great one for my students to imitate in their own pieces of writing, as the outline was clear and consistent. But first, I gave students a chance to collaboratively practice some of the thinking it would take to get there. I gave them some time to brainstorm other “Five Things ____ Can Teach You About Life” lists in their writer’s notebooks. Then, I had students get together in small groups to share their ideas. They chose one idea for a list and wrote it out on the giant sticky notes that I have in my room. They came up with a range of ideas, some of which drew on our preceding essential question work, and some of which did not:

After they made their lists, I armed them with normal-sized sticky notes and had them circulate the room, reviewing the lists that other groups made. Their job was to put at least three sticky notes on other groups’ posters showing examples from our common texts that supported one of the reasons on the list.

Here are some of the final products: 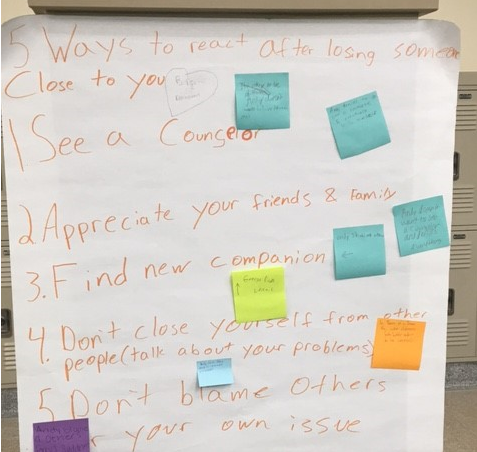 Although my students used this as a jumping off point for essay writing, this activity itself served as a collaborative way to review common themes among our three class texts. In the future, I think it would come in handy as a way to review at the end of a novel unit or practice writing “Listicles,” which seem to have taken over the internet these days. Later this week, I will be back to share how we moved from these lists into polished literary essays.

You can connect with us by leaving a question or comment below, finding us on Facebook, or Tweeting Beth @btoerner! Stay tuned Wednesday for Part 2 of her series!