Every time I go to a workshop about research writing and synthesis (and I’ve been to a few since I teach both AP Language and AP Seminar), we talk about making smoothies or chocolate chip cookies or chili.

In every instance–much to my disappointment– we’re not talking about eating, we’re talking about blending evidence effectively.  We are trying to figure out ways to explain synthesis to students.

Of all the food metaphors, my favorite has always been the smoothie because it’s easiest to explain the “almost there” step to the kids:

“You don’t have a smoothie yet, kiddo. This is a fruit kabob.”

I can get them to the point of recognizing that they need to have multiple, different sources to support a claim, but the idea of getting those sources to “talk to” each other is the tough part. They line them up (kabob) instead of blending them (smoothie).

Since my students responded well to color-coding their commentary about their research, I decided to go the color route again and be more explicit in how I instructed the shift from kabob to smoothie.

Step One: Let’s Look At A Mentor Text

My students are working on Individual Research Reports for AP Seminar. For the non AP Sem folk, think traditional research paper. Though I was tempted to use a source from one of the academic journals they had found in their research as a mentor text, I didn’t want them to be overwhelmed by dense research. I wanted the focus to be on what the writer was doing with the evidence, so I needed it to be easily understandable.

I used a released, student-written, high scoring sample from the College Board. The students had already read the paper as a model at the beginning of the unit, so this time I just isolated one paragraph.

We looked at the paragraph, and I asked them to identify claims and the actual evidence.

They came up with this:

So what’s all that other stuff??

We read everything that wasn’t highlighted and decided those were either qualifiers–words explaining where the evidence was from–or connectors–words explaining how the pieces of evidence fit together. We talked about how they were more than just transitions–those words were working hard to add pieces of information to the original claim and build to other claims.

We put the qualifiers in red and the connectors in blue and this was the result:

After all that, I could tell they were overwhelmed. They needed to practice with something easy and see that they could do this themselves. Unfortunately, this realization came about ten minutes before class so my materials had to be thrown together quickly.

I chose two topics at random: sloths and skydiving (literally no reason for either other than I was rushing and they popped into my head). A quick google search revealed some facts and quotes about each that could serve as evidence. I quickly scribbled four for each topic on different sheets of paper and made up some sources: Dr. McSmartyPants of the Sloth Institute, The Skydiving Research Cooperative, etc.

I divided the kids into two groups, gave each group four colored markers, and assigned them a topic (sloths or skydiving). Their task? Right a paragraph using this “evidence” that blends rather than kabobs. Claim in green, evidence in black, connectors in blue, and qualifiers in red. 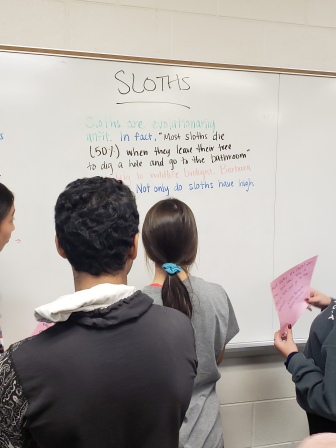 They got to work giggling over the silly evidence and deciding how to use it to prove things like the evolutionary shortcomings of sloths. They argued over connecting and qualifying words (How do we show this builds on the previous evidence? How do we show that Dr. McSmartyPants holds more weight than the other sources?) and their final paragraphs were great!  Using the trivial topics to practice a tough skill helped them see that they are capable of blending evidence when they understand it and what they’re using it to say.

Step Three: Let’s Apply It To Our Research Writing

After that, I set them loose on their own essays. I didn’t want to require them to color code the entire 1200 word essay, but I encouraged them to consider doing one paragraph. I was pleasantly surprised to see most kids doing it on their own.  It ended up being an editing strategy for them that helped them look at their paragraphs a little more objectively. As soon as they saw the paragraph in color, they could see what was missing or they noticed that the only connector words they were using were “next” and “for example”.

It created an easy entry-point for peer editing conversations as well. Over the next few days, I overheard things like “I don’t think my connectors are making my evidence work together” or “Is this enough explanation of why the study was done in the first place?”

This did not magically transform all of my students into confident smoothie producers. There were definitely still some kabob-y paragraphs in the final drafts (and even a few dreaded “lone strawberry” summary paragraphs! Time to re-teach!). Still, it nudged the majority of my students in the direction of better synthesis of their evidence. They’re thinking less about how many sources to plunk into a paragraph and more about how to use their evidence in a way that says something interesting. For month two of the school year, that’s good enough for me!

What do you do to teach synthesis? I think it’s the hardest thing to explain to kids with research writing so I’d love to hear what you do! Please share in the comments below or connect with me on Twitter @TeacherHattie