Today’s guest post is from Paige Timmerman, a high school English teacher in Salem, Illinois. She has guest written for Moving Writers before as she explored audience and the college essay! You can connect with her on Twitter at @pbrink12 or via e-mail at timmermanp@salemhigh.com. 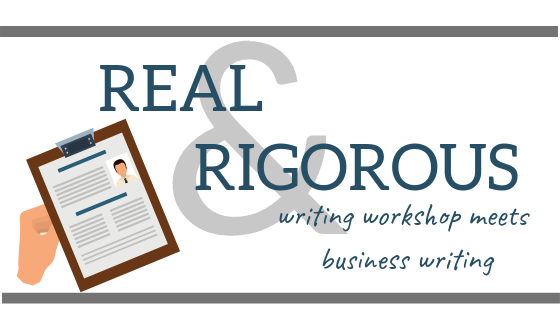 Senior English can be a beautiful and frustrating thing.  For my honors students, it’s great— the standardized testing cloud has cleared, and they can enjoy one final year of high school with their friends while earning college credit.  But what about everyone else?  Deciding what to do in the senior year with a “general” English class has always been a challenge for me.  This group is always an odd mix; some want to work right away, some want to join the military, others want to go to college at some point.  But while their plans vary, the consensus for how they feel about high school is pretty unanimous— these guys are tired of it.  I mean that literally, too.  They’re tired.  They’re staying up late, but they’re not doing homework.  They’re working.  They’re taking care of siblings or, in some cases, their own kids.  They have real lives, real challenges.  They want school to feel real and applicable, but oftentimes, it doesn’t.

I had heard of other teachers using a “business and technical” style approach with these types of students, where they produce real-life, workplace documents like resumes and cover letters.  While I was initially excited to jump on the bandwagon when assigned to teach this class for the first time (School was finally going to feel real to the students who craved it most!), my excitement was short lived when I realized what an injustice this approach could be.  It’s my job as a teacher to prepare all students for whatever pursuit they decide lies ahead, not to claim these students get to prepare for college while those students have to prepare for the workplace.  So what was I to do with this group?

Luckily, I was in grad school at the time and was able to spend some time researching this dilemma.  In short, I found that I could, in fact, have it both ways; I could have my regular English students meet the same rigor of my honor students while using workplace preparation as a topic of study.  When doing so, I just needed to be deliberate about ensuring both groups were exercising the same critical thinking muscles.  While the way they are presented may be different, all students should have the same access to the same skills.  My excitement for the approach regenerated as I began thinking of ways to make this happen.  Writer’s workshop had been instrumental in adding the critical thinking element to my honors class, so why should my regular English class be any different?  Here’s how it helped me keep the rigor in my resume unit this year:

The whole concept of analyzing a mentor text drips with rigor.  Why did the author set up the page like this?  What would happen if she didn’t use that expression?  Which techniques in this piece might work for me?  These questions are hard to answer, and they lead to conversations that are grounded in close analysis of a text.

I knew this group’s first go-around with reading mentor texts like writers would be challenging, so I decided to begin with a potentially real scenario so students would understand the importance of the concept.  I did a quick Google search for example resumes for secretaries, found four I liked, and distributed them to my students.

Then, I explained that today in class, we were going to pretend we were each owners of a small computer repair shop, and we needed to hire a secretary to help with the workload.  I had students examine the resumes in pairs and complete this graphic organizer, which required them to defend their choice of which candidate to interview and who to leave behind while citing evidence.  We closed out the class period by discussing our choices together as a class, which allowed for some friendly debate about who should be the chosen candidate to interview.

Putting students in this employer scenario was an invaluable way to introduce them to analyzing mentor texts.  When we came together to discuss the activity as a class, it was much easier for them to answer difficult questions like the italicized ones above within the context of a real-life situation.  They understood how important it is to have perfect grammar, an eye-catching format, and strong action verbs on a resume because they saw firsthand how these things can make or break a candidate when being considered for an interview.

The next day, I set the timer for 5 minutes and had students list as many guidelines for strong resumes they could think of.  I awarded the winner, and we combined all of our ideas together on the whiteboard.  I explained to students that this list would be what I used when assessing the final product of their resumes once they were complete.  Thus, they were being assessed based on knowledge they built through inquiry and examination of mentor texts rather than what I transmitted to them through a lecture.  (Notably, this is exactly what I had my honors students do after examining mentor texts during their memoir unit.)  I ended the period by having students write down three questions they still had about resumes after the work we had done so far.

While I can do my best to answer students’ lingering questions about resumes, here’s the thing: I’m not an employer.  I can tell students what I would do and what I think they should do, but I cannot provide authentic answers to their questions because I’ve never actually sat down with a stack of resumes and decided who to interview.  Luckily, I work in a building with three awesome administrators who look at tons of resumes every year and can provide better answers to these questions than I can.  And what makes it even better is that they all used to be teachers and love getting back into the classroom for a bit.

For the resume unit, I invited my principal, Mr. Boles, to talk resumes for the day. (I have the other administrators come in for other units.)  Hands down, this was the most valuable part of the unit.  I can tell my students to proofread their papers until I’m blue in the face, but hearing my boss tell them he throws resumes in the trash when they have typos— well, that’s something that resonates.  Even my most reluctant learners’ eyes were glued to him the entire class period.

The next day, we reflected on the most important items covered when Mr. Boles discussed resumes with us.  We revisited the list we made a few days earlier with guidelines to follow when creating resumes and revised it with new knowledge gained from his answers to our questions.  For example, nobody had mentioned having an objective during our initial conversation, but we added it to the list after Mr. Boles said it was the thing he looks for first.

During his time in my classroom, Mr. Boles shared that the best resumes are clearly personalized to the desired position and company, and it is a pet peeve of his when he can tell the resume and supporting materials have been copied and sent to multiple employers.  I agreed and saw this as an opportunity to once again put rigor into the unit.

As a result, I required each student to find a job posting online (Monster and Indeed were two suggested websites) that they would like to use as a guide when crafting their resumes.  The posting had to be something they could apply for directly out of high school and preferably something related to the careers they one day hoped to have.

Once they did this, they completed the “Thinking Ahead” graphic organizer, which required them to think critically about what type of education, work experience, references, and other activities the employer would be attracted to and consider what experiences they have that might catch the attention of this specific employer.  This was hard— students had to really look closely at the job posting to consider what they might like to see.

Once students had completed the graphic organizer, they began drafting their actual resumes to fit the needs of the potential employer they chose.  During the process, Mrs. Quandt (my classroom aide) and I conferred with them and offered guidance, all the while keeping in mind the guidelines we had built together as a class.  We also consistently found ourselves returning to the job postings students had printed out when they became stumped on what information to include and how to phrase it and asking students questions about what this particular employer might want to see.

When it came to mini-lessons, I did what I felt my students needed every day.  Sometimes, I would review grammatical concepts I noticed they were struggling with; other days, we would discuss one particular aspect of the resume students had trouble with, like phrasing an objective.  There were a few times I put a couple positive student examples under the document camera, and we examined them together.  This was especially valuable to one student who had been struggling to understand what it meant to have an eye-catching format.

This may seem like a simple unit, but for the students in my class, it was difficult.  The students in this group are not at the top of their class, and they are not used to being praised.  The concept of “selling yourself” was very difficult for them, so most of them required a large amount of individual attention from Mrs. Quandt or me.  While I had planned on doing another activity that required them to examine a partner’s resume as if they were the potential employer, I decided against it since it took us more time than I planned to get a polished piece.  And that’s okay!  My students were still thinking critically the whole time…I just know for next year that if I want to get to the partner activity, I need to adopt more mini-lessons and support on the “selling yourself” aspect of the resume.

In the end, my students were challenged, but it was a good challenge, one they were willing to face because they know that it’s something they will be facing soon.  Many of the activities in this unit mirrored the ones in my honors class; they were just packaged a bit differently.  So… as exhausting as it was to provide so much individual attention and respond to so many frustrations, doing so confirmed that what I sought out to prove in this unit is true: keeping the rigor in the context of a “business and technical” style approach to senior English is, in fact, possible.  The students in my regular English class are just as armed and just as ready to face whatever they choose  next.

What are some other ways to make business and technical writing rigorous?  I would love to hear your ideas on Twitter at @pbrink12!