I’ve been a film fanatic since college, so my Twitter feed has a disproportionate share of film criticism amidst all the excellent educator voices.  One of the better sites I’ve discovered for film coverage is Film School Rejects (Twitter handle: @oneperfectshot). They often just tweet singular frames from films which makes for great visual analysis if you’re doing film in class.

But today I want to point out a different sort of feature they often offer up on Twitter (as do dozens of other pop culture sites–feel free to search for somebody writing about your favorite genre and medium!).  I’m going to call these pieces “Expert Recommenders” since as a genre they constitute very particular sort of recommendation aimed at expanding the cultural experience of viewers of a given film. I love it as a model for young writers because it draws on the writer’s inherent expertise in a given area in order to enrich the experience of a piece of art for her audience.  Consider for example this piece about comic books to explore if you’re obsessed with the latest Avengers films (and let’s be honest, who isn’t, besides my weird buddy Hattie!?). 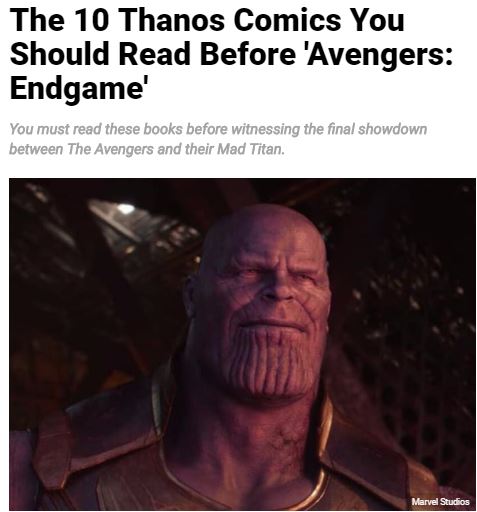 Basically, the article is a playfully-voiced informative piece that offers fans of movie X a curated list of other things they might seek out to enhance their experience and deepen their cultural awareness of a genre or thematic idea.  And again–replace movies with whatever you want to let kids write about; it’s a universal structure for discussing all sorts of things.

Besides all the fun kids would have getting to pick out a list of other reading/viewing/etc that they think people with a shared interest should also seek out, I want to point out a couple of the lovely writerly things such articles allows students to practice.  I’ll use the article I linked to above for examples, since Avengers Endgame opens tomorrow evening and therefore just referencing that title here will guarantee this post gets like 10 billion search hits.  More like Endgame-the-system, amiright?!

One cool thing that I don’t think writers in English classes get to do enough is explore the personal meaning of things to them through assigned writing pieces.  Too often we think we’re honoring that sort of highly personal stuff because we have them stuff it into their notebook (which is fine, but also sort of relegating it to a defacto inferior status).  We get so worried about “formal” and “MLA” and other “official” writing that we overlook all of the professional writing careers that involve producing writing that looks exactly like this piece!

Look at how effortlessly the author here melds personal passions and expert knowledge into a uniquely detailed profile of the central villain of the film, Thanos:

Since his creation by Jim Starlin in the pages of The Invincible Iron Man #55 (February 1973), writers obsessed in establishing empathy for the tyrant. Infinity War and Endgame scripters Christopher Markus and Stephen McFeely continued in that tradition by exploring the heartbreak experienced between the Titan and his adopted daughter Gamora. Also, on planet Earth, where climate change is a happily ignored threat, Thanos’ solution of eradicating half of existence to make the universe barrable to the remaining few seems like a logical equation. He’s a monster with a point.

Since one of the focal points of English 11 at our school is on varied and interesting syntax, I will also make a huge point to my students about how impactful that final, simple sentence is as an understated summation and re-emphasis of everything that comes before it.

And speaking of lovely sentence structure, look at the tasty parallel structure the author uses to introduce her list–students can sometimes be overzealous with theasuari and sweeping adjectives, but in a piece like this, finding the words to properly approximate their offerings to the audience is both appropriate and important to setting up the piece.

They [her list of comics] range from the epic to the personal, the comedic to the horrific. Some you will already be deeply familiar with, but hopefully a few will catch you off guard. If you make your way through all of them, I’m betting you’ll enter Avengers: Endgame with a small part of your primal brain rooting for the bad guy.

Finally, notice what the author is ultimately offering to her readers–this is actually a genre of highly analytical writing as much as it’s an informative piece and certainly as much as it’s a personal piece.  Her list–were one to want to track down 10 obscure comic books–offers to reframe the entire character of Thanos in the film series for readers who take up her charge. Students are great at this sort of thing if you let them explore their areas of passion.  Imagine the sorts of things your students might lend this kind of high-context, high-interest assignment to:

The possibilities are pretty much end(game)less.  Just make sure they keep it spoiler free–people get really angry about that stuff.

Have you got any favorite pop culture recommendation lists to add as a mentor text?  Find us on Facebook or share it with me on Twitter @Zigthinks .